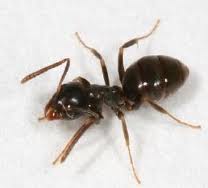 Odorous House Ants(sugar ants,Kitchen ants,little black ants)
Odorous house ants, known by the
one of the most common species of ants
encountered indoors.Odorous ants are
quite adaptable and occur throughout the
seattle washington. They nest in a wide variety
of habitats, including sandy beaches, pastures
and fields, forests, wet areas,
and houses or other buildings.
Odorous antsgo largely unnoticed by humans and are
not considered pests. It is when they invade
homes and begin foraging in the sugar bowl
or on other foods that they become a problem.

Odorous house ant workers are about
one-tenth of an inch long, are uniformly
brown to blackish-brown, and do not have
an upright node between the thorax and abdomen.
odorous house ants have a distinctive odor,
especially when crushed, and this odor can
help you identify them.
Odorous ants do not produce large,easily visible
nests like those of fire ants. Instead, their
nests are much smaller and may be found in
the soil or beneath rocks, stones, bricks, logs,
boards, or other objects on the ground. They
also nest under the loose bark of stumps
and logs; in stacks of firewood; in plant
cavities, insect galls, trash piles, and animal
nests; under mulch in flower beds; under
shingles or siding; behind ivy or other vines
on external walls; behind brick veneer; in
wall voids; and in many other locations.
Indoor nests usually are located in or near a
source of moisture.
This pest has the habit of moving its nest
site every few weeks, which can make control
more challenging. odorous ants(sugar ants) colonies consist
of a main colony, or nest site, and many
satellite nest sites with queens and broods
of their own. The main colony and satellite
colonies are interconnected by foraging trails.
In most cases where they nest in homes, the
colony also will have other nest sites located
outside. Colony size may range from several
hundred to many thousands of individuals.
Colonies of Sugar ants(odorous ants) will contain many
reproductive queens.
Odorous ants(sugar ants) workers are
noted for their love of honeydew produced
by insects such as scale insects, aphids,
mealybugs, and plant hoppers. They eat the
honeydew and tend and protect the insects
that produce it. Additionally, workers regularly
feed on flower nectar and other plant
secretions. They also feed on both live and
dead insects, dead and decaying animals,
and a variety of other things.
Odorous ants commonly know as sugar ants feed on a wide
variety of foods, including meats, vegetables,
pet foods, and fruits. They are attracted especially
to sugar, honey, sweetened cereals, pastries,
syrup, and other sugary foods. Because
they like sweets so much,
odorous ants are most commonly
found in the kitchen/pantry area, but they
can occur anywhere in the house where there
is an attractive food source, such as where
pets are fed, where pet food is stored, or
where garbage cans are kept. Because these
ants nest primarily outdoors, indoor infestations
are likely to be linked to outdoor
colonies. Foraging ants lay a chemical trail
from the colony to the food source, and
with a little patient effort, these trails often
can be identified and followed back to the
nesting site.
Control of Home-Invading Ants
odorous house ants can be as simple as locating their
trail, wiping it away with a damp, soapy
cloth, and removing the food source that
was attracting the ants or storing it in an antproof
container. Without their scent trail, the
ants lose their way to the food source, and
are forced to either re-establish the trail or
forage elsewhere.
However, if there are heavy populations in or around the
home, they will likely return eventually, especially
if they have nests already established in
your home or have readily available routes
into your home.
Long-term control of these ants can be
quite challenging, requiring a combination of
methods We recommend you call us to take care of the problem