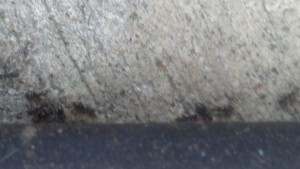 Although these ants can live inside, they get their name because they make their nests in or under cracks in pavement. They are typically found in the eastern half of the United States, California and Washington. Pavement ant colonies average 3,000 to 4,000 members and have several queens.

They will eat almost anything, including insects, grease, seeds, honeydew, honey, bread, meats, nuts and cheese.

This ant gets its name because it most commonly nests in soil next to and beneath slabs, sidewalks, patios, and driveways. Indoors, pavement ants nest under a building’s foundation and within hollow foundation walls.