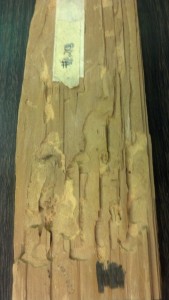 Beetles feed on many different plant and animal materials. Adult beetles often deposit their eggs near the food that the larvae will eat when they come out of the eggs.

Some beetles can become destructive pests. Carpet beetle larvae eat natural fibers and feathers. They often damage woolens and other fabrics. Other beetles, like powderpost beetles, feed on hardwoods and bamboo. These pests attack furniture and other items made of wood.

Some, like the flour beetles and the grain beetles, attack food products in homes. They also damage food in production facilities and stores. Some beetles damage lawns and landscapes. Immature June beetles, called grubs, attack the roots of grass. The elm leaf beetle damages trees by eating the leaves.

Many beetles are beneficial insects. The lady beetle (often called ladybug) feeds on plant pests like aphids and mealybugs. Gardeners appreciate these beetles and try to keep them in the garden.

Sometimes beetles, including lady beetles and ground beetles, can become nuisances. In the late summer and fall, homeowners can find hundreds of these beetles clustered on the outside of the home. The beetles are trying to invade homes for shelter through the winter or are looking to escape inclement conditions.